We have an ant problem…but only in the winter months. I thought ants were a summer problem, but apparently that is not the case and every winter these little creepers march into our home and try to feast off of our crumbs. One particular colony (we have a couple colonies, I KNOW, its gross) likes our bathroom. Why? I don’t know. I promise you I DO NOT eat in our bathroom. Maybe the little guys are thirsty and this is the only place they can find water. Perhaps they like hair and dust because that is really all there is on our bathroom floor. (Don’t act like your bathroom floor doesn’t have hair on it). Usually there are not a lot of ants. Maybe like four or five just kinda wandering around. They seemed lost and perhaps a little desperate.

To take care of the problem I bought some ant traps and strategically placed them in their path. Soon there were a bunch of ants feasting on the poison and you know what…I felt bad.
You see, I have this way about me…I talk to animals like they are people (see this story). I used to try to save spiders instead of kill them until this happened.
As I was watching the little buggers march in and out of the bait trap I imagined what those ants must have been feeling.

After weeks of sending scouts in search of anything to feed the family in the bathroom (eye roll) they were about to lose all hope. Then one scout comes back with great news…FOOD!!! This scout was the hero. He saved the colony! It’s going to be the best winter ever! Come on everybody! Lets go! Follow me!
And so they march, find the prize and bring it back to their queen.

The rest is history.
I don’t know how much they have to eat to die from the poison or how long it takes. All I know is that it will only last for about 3 months. Then we have to set a new trap. Why is that you think? I could Google it, but I don’t feel like it.
I think only the living ants die (redundant I know) and the eggs live. And when they hatch, there are a bunch of little Orphan Anties (see what I did there).  And then the cycle continues. That is until summer, then they make their way outside again.

I think I need to stop imagining the ants are like this:

Ants are not cute little Pixar characters that have inter-species friends that break out in song occasionally.
NO! They are mindless consumers with a mob mentality.
After I follow my  rabbit trail of thoughts,  I don’t feel so bad for poisoning the little creepers and leaving their offspring orphans. 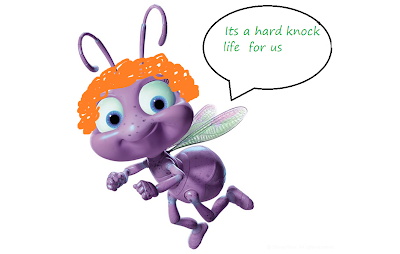 This site uses Akismet to reduce spam. Learn how your comment data is processed.

Get Cool Fabrics and…