3 Hurricanes, an earthquake and one wicked storm.

I lived in Guam and Hawaii as a kid for a combined total of five years.
Guam is located in Typhoon Alley and gets hit by some extreme storms. Not while we were there though.
Just before we moved to Guam, Typhoon Roy hit and it was big one. Winds reached 110 Mph. I don’t know too much about it except that my mom got an awesome yellow tee that said “I Survived Typhoon Roy”. Its easy to survive a happening that you aren’t present for. I later stole borrowed indefinitely this Tee when I left for college…ironically the tee was stolen from me my Jr. year. Somebody on our floor was breaking into rooms and stealing random things like jeans, T-shirts, books and movies.
Who steals T-Shirts from 1988?
Anyways if you see this shirt on anybody…
…feel free to make a citizens arrest and immediately strip them of the shirt and contact me ASAP.
Later we lived in Hawaii. We were a Navy family. Hawaii actually doesn’t get hit by too many dangerous storms. Just the occasional shark attack and lava overflow. While living there we were hit by hurricane Iniki, which did cause a lot of damage but to a different island than the one we lived on. Not a lot of people know about Iniki because it was immediately after hurricane Andrew that hit Florida a couple weeks before.
We didn’t get any cool Tees from this storm. Although we did film it on our video camera, but then left the VHS in a car rental. 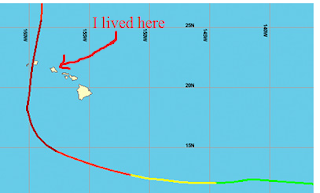 So if anyone invites you into their home and wants to show you a home movie of Hurricane Iniki on VHS…make a citizens arrest, strip them of said video and contact me ASAP.
All this to say we were spared from some very dangerous storms.
Then I moved to a suburb of Philly.
You would think the worst weather I would see are some rain storms, some snow storms and some hot weather during the summer.
Since moving here I have “survived”…
Floyd
A rumored tornado
An earthquake
Irene
and now Sandy…
Weird right?!
1999-I was in college when Floyd hit and 4 of us were driving to Maine to a wedding and got stalled a bit in Point Pleasant NJ for several hours because we weren’t allowed to go any further. I remember feeling the water rushing under the floor of the car. Eventually we made it to Maine in time for the wedding.
2006-We had a wicked storm hit the area. Trees that were probably 200+ years old were broken in half. People had tree limbs fall on their cars as they were trying to drive home. I don’t know if it was ever confirmed that a tornado touched down, I just heard rumors. I do know it was like driving in a safari to get to work and we were without power for 3 days. And it was during a heat wave. Good times.
2011-An Earthquake…What the What!!! Here…Yes…
I was working from home and heard a rumble and saw my lamps and mirrors shaking and thought to myself  “What in the world is she doing up there?”
I thought my upstairs neighbor was moving a grand piano around up there with her 500lb friends. I went outside to see if I could see what she was doing and that’s when the other Stay-At-Homers came out and said “I think that was an earthquake!” I was sooooo excited. I started jumping up and down like a little kid in my living room and turned the news on to see if it was an earthquake and indeed it was!

2011-Irene…”Come on Irene, Too ra loo ra too ra loo ra yea” What those arent the words!? Another hurricane? Seriously? 2011 is known in these parts as “The Year of he Hurriquake.” We survived!
2011-Halloween Snow Storm- I just have fond memories of this one because I was our church secretary at the time and there was a wedding at our church and the power went out and so me and few others ran the show.
2012-Sandy…Oh Sandy…you came and you’re here and your windy. And then you blew me away oh Sandy…What those arent the words?!
So here we are, in the safe land of PA experiencing the 5th or so “Storm of the Century”.
Maybe I should move some place safer, like Tornado Alley or Mt. Everest.
Just Brain Storming here.

This site uses Akismet to reduce spam. Learn how your comment data is processed.

Get Cool Fabrics and…

Lots of colors and prints to choose from over at m

This spring I added several new patterns to my #Sp

I haven’t been sure how to address this space la

It was a beautiful weekend. Looking forward to mor

RedBubble is now selling masks! I have a few desig


Error: API requests are being delayed for this account. New posts will not be retrieved.